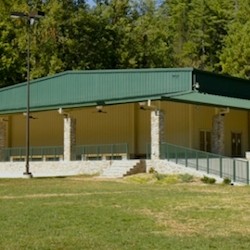 Built in the ’70s as metal prefab building, The Wilds Activity Center has always been an acoustic nightmare, and in a non-profit camp kind of ministry funds for extensive acoustic treatment and a redesign of the building were out of the question. When I began serving as Tech Director in 2007, I worked with what I had, making improvements along the way as I could. One year, we pulled out every inch of patched-together wiring in the building, another year we replaced the amplifiers and redid the mix position as the ceiling was collapsing! The lighting system, video system, everything in the building got some attention, but after years and years of holding things together and doing our best to make it work the audio system could go no longer.

After the administration planned a massive fundraiser, I got the green light to finally build the system that the building needed. On paper, my design parameters were just shocking. We had to design a system that on one hand could be subtle, detailed and very musical in an acoustically challenging space and on the other hand during Funtime and final scoring be able to control the 1,500 campers in the room with cheering topping the meter at over 120db! Not to mention the need for awesome monitoring and the capability to have everything from bluegrass to sound effects to preaching to choral and classical music sound excellent. Just over a year in design, while the funds were being raised, it was decided that we would go with large vertical line arrays in order to really direct the sound away from the walls and ceiling and down to the audience. The system had to have the power to hit 130db and take it without clipping or overheating. I laughed when I saw what I had on paper—it was technically impossible to do this.

When the system was done, using what we could from the old system, and a lot of new, we ended up with a 48-channel Soundcraft mixer, over 5 miles of new wiring and a system that was awesomely powerful but could be tamed when it needed to be. The main speakers gave 43,500 watts of power with 16,000 watts of subwoofer power and 4,000 watts of stage monitors. The main DSP was handled by an Ashly Protea, DBX Driveracks and Sabine Navigators with a BBE processor to contour the subs and a tube compressor to warm up the top end. The system was based on a new line array system from Carvin, which we decided on after hearing a demo at a trade show. For the cost they could not be beat.

In the end, the system’s clarity was just outstanding—no more dead areas and every seat had direct sound. The final test during the week it took us to tune the system was a volume test. Could it live up to the 130db? I was cautious… with temperature monitors and ammeters running, after a warm up and break in, I ran the system up to just under clip. My meter tops out at 130 and I had room left. A few moments after I was done with the test someone came in asking what was going on… they had heard me on the other side of the campsite in a closed building!

But we all know facts and figures and numbers mean nothing if in real life the system can’t perform service after service. The first week was good with some late night adjustments due to camper and staff feedback. While my initial tuning sounded good, people reported ear fatigue after the 2 hour services and loud preaching. All it took was adding a compressor to the main wireless’s channel strip.

I was anxiously anticipating final scoring of week one. Normally with all the cheering and screaming you can’t hear the speaker and he was forever losing his voice since previously the building did not have enough gain before feedback to allow running lots of monitor. This year we had a directional E6 earset mic and over 105db of monitoring coming back at the MC. Would it be enough? As the moment approached in the program, I felt nervous. Would all this work be worth it? The lights go out and I pushed the system to where I felt I needed it to be. The MC shouts over the din: “Are you ready to find out who won the week!?” The compressor does it job and keeps him from peaking or clipping. I had people stationed around the building. For the first time in 40 years, the system conquered the crowd! After the first scoring event, I checked everything. It was all within spec. Nothing was hot, and cooling was working as it should.

Throughout the rest of the summer we continued to tweak and tune the system to dial it in to exactly where I wanted it. It being “my system” that I was running, I wanted it to be just “so.” Service after service the system was flawless!

From the outset much time was spent in prayer asking the Lord for help with the system in order to meet the seemingly impossible budget, time and performance requirements. God gave the wisdom. He deserves the praise for the successful completion of what was the most daunting task of my career thus far.