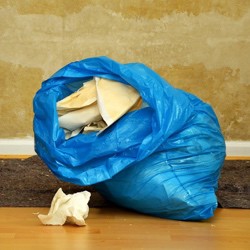 Whether we are starting an installation, performing a consulting inspection, or tracking down a system gremlin, more often than not there is one thing we can count on finding. It can take different forms, be it old wiring, empty boxes, abandoned power cords, gear that hasn’t worked in years, or even parts and pieces from Bob’s last attempt at a shining Bethlehem star! It’s amazing what we see! Whether it’s located in the attic or under the stage, the findings usually have one thing in common—it’s nothing more than garbage!

Why is this a problem? Well, one church attic I was in was so full of storage (better known as junk) that the sound system wiring was being pinched and damaged by stuff that fell on it when more stuff got jammed in. In another case we found more bad cables hanging on the cable wall than ones that could actually be used each week. Why?

We have a saying when we do any major work, and it usually ends up being the first step we take in a project… Garbage out!

Here are a few tips to keep garbage out of your tech ministry.

Let’s keep it clean, and keep garbage out!