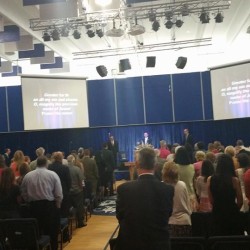 First Baptist Church of Westwood Lake called us asking about the possibility of turning their gym into a sanctuary. We have done this type of project a couple of times before and it’s usually pretty standard fair—acoustically treat the space, protect the gear from flying balls and such during the week, use speakers with excellent pattern control to deal with the traditionally poor acoustics of gyms, and make certain everything is as simple and flexible as possible to ease setup. Typically we can design a system for this type of space by just viewing photos and blueprints without having to make a site visit.

However we quickly discovered this would not be the case with this job. Westwood had a bit of a time crunch, namely, five weeks to be in their new space. So within 4 days we were on our way to Miami, FL for the initial site visit. This would be no normal installation for a couple of reasons. First, the technical requirements that the church wanted were quite advanced: a full worship center, IMAG, video streaming, live production switching, full lighting, and a world-class audio system. Second, the school’s division sports league had very strict requirements for the courts enforced with hefty fines. And those requirements specified that there be could be no hanging speakers, no hanging projectors, and no hanging lighting over the court. Third, I discovered from the maintenance department that this area of the building had virtually no power, no networking, and further more the power they did have was so dirty that it kept blowing lights and scoreboard parts. And to top it all off the gym structure was 100% solid concrete: walls, floor, ceiling. It was a 120’x80’x26’ hurricane and bomb-proof structure. If we were to pull this off in the time frame provided it would only be with the help of the Lord.

As we talked with the church leadership the only workable solution we could come up with was for all the sound, lighting, and projection equipment to slide out of the balcony for the services and then retract back during the rest of the week. Although other companies had deemed it impossible in the time-frame, we realized that as impossible as it seemed, it was what we would have to do.

The plan was to turn two of the coaches’ offices on the main floor into a control room that would house all the amplification, video streaming, IMAG, and video switching gear as well as the translation staff. We decided to use an iPad-based mixer in order to allow the front of house tech to sit in the audience. The control room also required a self-contained HVAC and dehumidification system to battle the 100% humidity and 100 degree Miami heat!

After doing enough math to make one’s head spin, we determined we would need about 5,000 square feet of acoustic treatment to bring the room to a manageable reverb of under 2 seconds from its existing 30.99 seconds. Yes, we said 30.99 seconds. It was so bad you could not have a conversation without being closer than 2 feet.

To save cost (~$45k), we decided to buy the raw materials to build the panels ourselves. We also decided to add 200 additional acoustic baffles hanging in the ceiling to be certain we hit the needed less than 2 seconds of reverb. The acoustic panels consisted of two-inch thick compressed synthetic fiber material attached to the concrete walls using powder-actuated nail guns, then framed around with wood over which acoustically transparent fabric was stretched very tightly. This would allow just a small section of the fabric to be replaced if it ever got damaged. To further help with sound deadening (as well as light reduction for the projection) we also planned to install acoustically absorbent curtains over the windows.

After contacting several places to see about purchasing the needed moving AV mounting rig, and coming up empty, we realized we would have to design and build this one-of-a-kind creation ourselves, realizing that with the time frame there wasn’t a lot of room for experimenting. We dropped-shipped the needed steel and aluminum to the gym ahead of our arrival for the install.

When we arrived for the install lots of things started happened fast. It was amazing to watch this church come out in droves to work every night from the pastor and school administrator on down. Every night we had people painting, nailing, working with me on welding or cabinetry, putting in electrical circuits, hanging acoustic treatment, and even cleaning. We taught them how to wire and how to do many other tasks they needed to do.

Once the main tracks went up for the moving rig, we did our first test and although it was mostly a success, we found the motors were both slipping and getting caught up on the track’s welds. The slipping we found was a balance issue and we were able to correct it by changing the center of gravity of the trusses. In order to smooth out the track we used  a combination of JB Weld to fill any pits, a welder to fill any larger voids, and a flap disc sanding wheel on a grinder. One of the guys spent over 8 hours just polishing the tracks, but after he was done the rig ran perfect. Another challenge with the flying rig was cabling all the equipment. We used cables with the highest flexibility and quality and secured all the connections (electric, audio, DMX, video, etc) in a large umbilical cord. We also designed and built a custom pulley system to extend and retract the cables. When the installation was finished, we left the church with a safety and routine maintenance checklist. We also specifically trained a few key folks exactly how to love and care for this very special piece of gear.

To meet the requirements for the high-quality but flexible audio system we installed TOA HX-5 speaker arrays for the FOH on custom fabricated mounts that allow the pitch and yaw of the speakers to be adjusted at will. The subwoofers were too large to fly on our moving rig so we built an enclosure out of the center of the balcony for them and the dedicated keyboard sound system. After removing part of that foot thick concrete and steel reinforced balcony railing, we framed out the opening and stretched fabric from the acoustic panels over it making it invisible. Above and on either side of this space we framed large doors to let the rig easily pass through and then hide. All the doors were wrapped in more fabric essentially making them invisible as well.

Once the gear was installed and we tested everything we were ready to train the crew. What a team! They went from 2-3 members to over 15. Training was interesting to say the least. We had only 2 days and even some of that limited time had to be worked around sports schedules with only a partial setup. As usual, we trained on philosophy and theory first, and then the second day we trained by doing a full service setup. We covered every duty, every station in as much detail as possible.

Sunday AM, the crowd reaction was wonderful. We did have two technical glitches that morning—a projector that seemed to have a mind of its own, shutting off and restarting itself several times; as well as an apparent issue with the Spanish translation system. I attacked the translation system first, and after verifying it was working perfectly as it was supposed to, we found the issue. Many of the folks brought their receiver packs from the old church building to the new building which were no longer compatible as we had a completely new and different system in the new installation.  We all had a good laugh at that one.

After the PM service, I took the lift up to see the failing projector and realized that the exhaust from one projector was reflecting off of a part of the rigging and going right into the intake of the second projector. It was a bit of work, but we were able to re-hang the projectors further apart to correct that issue.

All in all, it was truly a wonderful experience to serve with these folks in Miami!

Video of the Rig 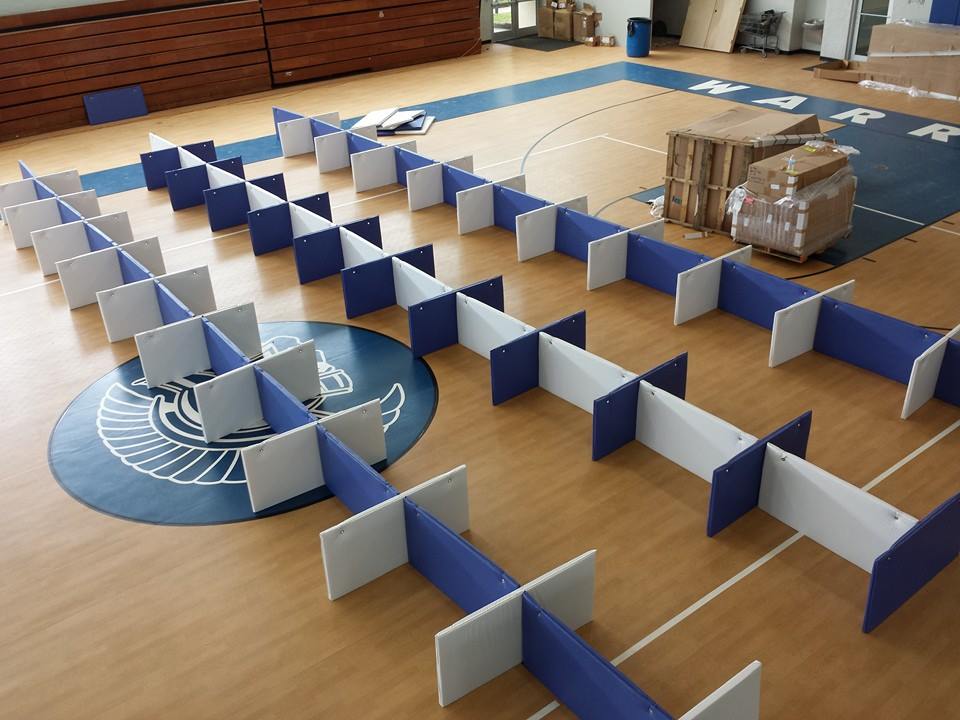 Ceiling baffles ready to be hoisted 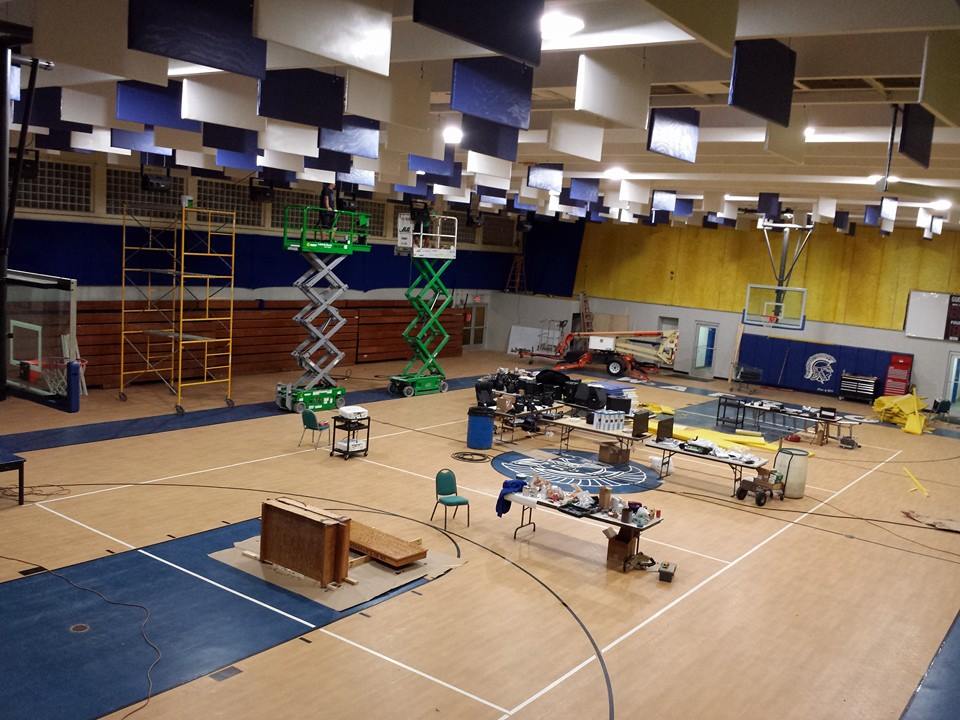 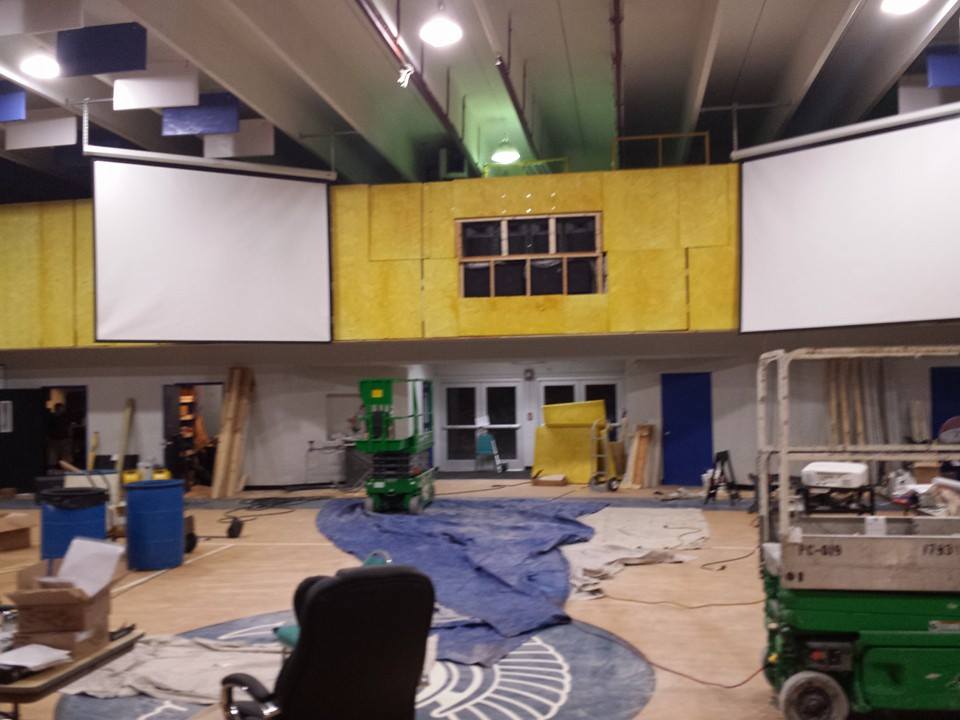 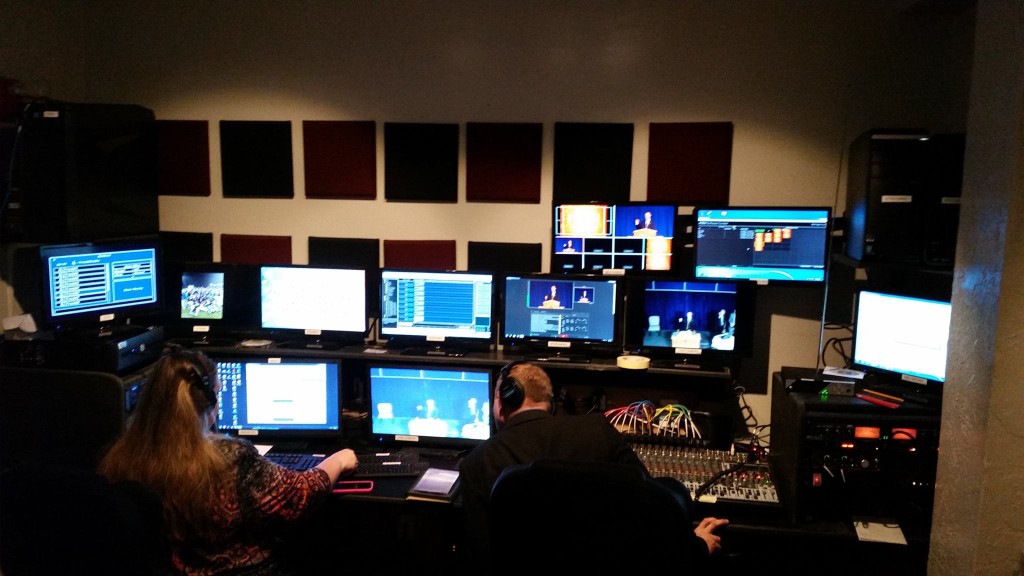 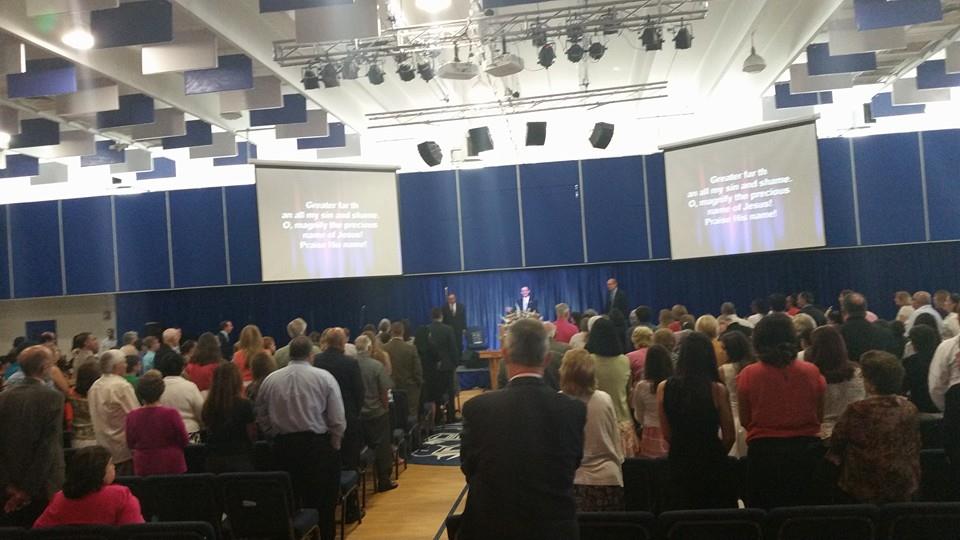